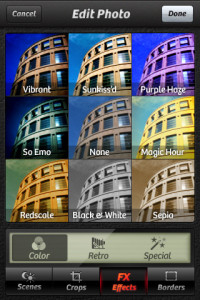 The developer of Camera+ (for iOS devices) recently announced that their app has hit 2 million sales. This figure is a huge success, both numerically and financially. To celebrate this milestone, the developers have decided to share some of their stats publicly, including overall sales volume and revenue from in-app purchases.

One of the most interesting revelations in the blog post is the upgrade numbers. Over half of the people who had downloaded Camera+ also upgraded to the latest version when it was released. This indicates a high level of user engagement – users did not simply “download and discard” which is a common situation in the mobile app world.

This is significant for any developers looking to make money from in-app purchases on Android. The target market for Android and iOS developers is relatively similar, so you can expect similar results in publishing an app to the Android Market. Referring to the use of in-app purchases as a primary revenue model, the Camera+ developers concluded:

So there you have it – in-app products might be useful to give a welcome boost to your revenue, but don’t base your entire business model around them. Better to stick with the tried and tested methods – paid apps, ad-supported, and “freemium”.