Normally I wouldn’t be so cynical about a company copying features from a competitor. It happens all the time. The basis of innovation is to take existing technology and build on it. But I find the similarities between the iPhone 4S and the Galaxy S II to be particularly amusing, since Apple is currently suing Samsung for… copying their designs. 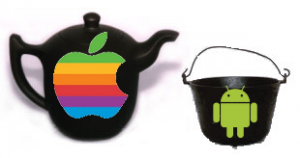 It seems I’m not the only one to notice the similarities. Samsung have kindly released a chart comparing the two phones to each other. Obviously they have a slight bias, but it’s still interesting to see how similar the specs are. In this case Apple’s the one playing catch-up: Samsung’s phone has been out on the market for months already, and Apple seems to be doing their best to match the specs, not surpass them.

Now obviously technical specs aren’t everything. But in my mind, the Galaxy S II has the edge here. It’s got a 2MP front-facing camera, while the iPhone 4S is only VGA. Additionally, the Galaxy S II has a larger screen, removable storage, dual-band WiFi, and somehow manages to come in lighter despite all of that.

As I’ve mentioned a few times on this blog, I own a Galaxy S II and am exceptionally happy with it. More than any other phone I’ve handled before. The screen is brilliant. It’s super-fast (even when I write buggy apps with horrible memory leaks it skips along 🙂 ). If the iPhone 4S handles anything like Samsung’s offering, it will indeed be a pleasure to use. With an 8MP camera and full HD video recording it’ll be a great enabler of creativity as well. And I am very glad to see iOS finally has a workable notifications system.

So overall – the iPhone 4S and Galaxy S II are both great phones, and the pinnacle of where our hardware is at today. The operating system, Android or iOS, is a personal decision and it’s probably evident which one I prefer 😉 I think Samsung’s version of Android is very user-friendly and shares a lot of paradigms with Apple’s iOS. My (non-technical) family have had no trouble using the Galaxy S II, where other versions of Android have proved confusing at times.

Apple’s announcement yesterday evened up the war on the hardware front, now it’s just up to each individual to choose the user experience.

But I have a strong suspicion the Nexus Prime will steal the thunder from both these phones, very soon…