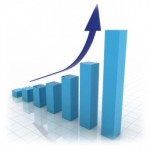 It’s over a week now since I uploaded the finished version of Tap That! Number to the Android Market. Some people have been asking how the app is going now, so I thought I’d share with you some statistics and figures from the past week or so.

When I first released the app, it was only an alpha “test” version. I uploaded it to the Market purely as an experiment, to gauge interest. I noted in the description that it was not yet playable, and only for testing. However, the demo app still received just over 100 downloads in the first few days. I was quite surprised that so many people would download a test version of the app. How many more would be interested in the real thing?

About 4 days later, I published the first full version of Tap That! Number. This version was completely playable, and included a proper description for the Market. This time the Developer Console took a while to update download figures, so I turned to my AdMob reports to indicate whether there was any change in the number of active users.

As you can see from the graph above, there was a significant spike in user engagement on the day the new version was released. However, this quickly dropped off, until after a few days I was getting a very modest 20-30 impressions per day. Taking a look at the Android Market stats tells the other half of the story – a total count of 178 installs, with only 43% of those active installs. This means an increase of only 70 users after uploading the finished app, compared to the 100 users who downloaded the demo version on the first day.

So the initial figures are out – 178 installs, 78 active users and several hundred ad impressions. The biggest lesson I’ve learned from this first week – don’t upload your app to the Android Market until it’s ready for public use. I probably drove away several potential users who downloaded the demo version and uninstalled after finding it unplayable. If I’d waited and released a complete app from day one, I could have boosted engagement levels significantly.

Things are beginning to move faster though, especially in the past few days. Earlier this month I reached $1 total earnings from AdMob (only $999 to go!), and just released an updated version which includes tactile feedback when a tile is pressed. I’ve got some particularly exciting news regarding this first update – but that’s best kept for another post! 🙂 For now, you can download the app and tell me what you think.